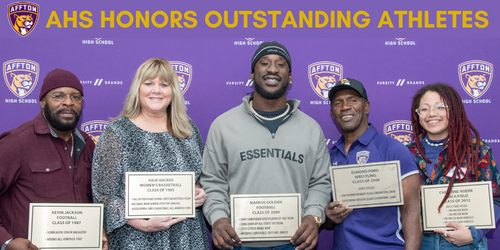 On Saturday, Dec. 3, 2022, Affton High School invited six outstanding athletes back to their alma mater to recognize their achievements. Honorees include:

"You have risen to levels of success starting with your time here at Affton High School, and take that knowledge, ambition, and commitment to success to the next level in life. We celebrate the history and traditions of the past in the ways we advise, coach, and encourage the students currently at AHS," said Dr. Deann Myers, Affton High School principal, during the ceremony. "Your story will be shared with each of our students as a beacon of light to follow into their own version of future endeavors. We at AHS are proud beyond measure of the legacy you have left in our hands."

The jerseys of each honoree are displayed at Affton High School, along with a plaque detailing the accomplishments of the athlete. At the ceremony, these displays were unveiled. Click here for a photo album of the event. Our thanks to Cindy's Photos for capturing this event!